Kazakhstan Oil and Gas Sector in the Focus of Events

Despite the deterioration of the oil and gas market conditions, last autumn international forums of the Exhibition company Iteca were successfully held, demonstrating the full range of technologies, approaches and solutions of critical situations for the Kazakhstan fuel-energy complex. 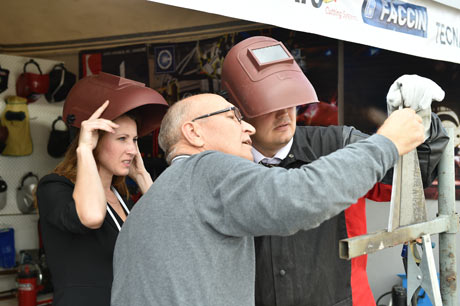 Today, the largest and most famous event in the region is the annual Kazakhstan International Oil and Gas Exhibition and Conference KIOGE 2014, which was held in Almaty for the 22nd time already.

This year the Exhibition has attracted more than 400 companies from 23 countries, and more than 6,000 representatives from all areas of the oil and gas industry have visited the Exhibition. National stands were from Germany, Italy, Canada, China, Malaysia, and, for the first time, Austria. Russian participation was widely represented.

Features and major innovations of KIOGE 2014 have been three new sections: "Welding: Equipment and Technologies", "Coating – Anticorrosive Coating of Pipelines" and "Oil and Gas Mechanical Engineering". In general, the exposition has been extremely rich of technical innovations and, that is very important, included local products.

At opening the Conference, the Senior Advisor of ITE Group Plc. Sir Andrew Wood, who has already become a living symbol of KIOGE, emphasized that the focus of Kazakhstan to move ahead in an increasingly competitive world was clearly defined trend. And the energy sector had long been a key topic in the movement.

- The Conference provides an opportunity that must be used: to discuss not only current issues of the present state of the oil and gas sector, but also promising trends in the energy sector (for example, few people had heard of shale gas five years ago, noted Mr Wood).

We should remind that for over twenty years KIOGE Exhibition and Conference has been officially supported and with an active participation of the Ministry of Energy of the Republic of Kazakhstan, "National Company "KazMunaiGas" JSC, Almaty City Administration (Akimat), Kazakhstan Union of Service Companies "KazService" and diplomatic missions of the participating countries.

More than 50 companies from Ireland, Italy, Kazakhstan, China and Russia were presented at the 9th Mangystau Regional Oil, Gas and Infrastructure Exhibition – Mangystau Oil, Gas & Infrastructure 2014, which was held in the City of Aktau in late autumn.

In his opening speech the First Deputy Chief of Mangystau Region Administration Suindik Aldashev stressed the importance of the Exhibition for the region and emphasized that five areas of the region development had been identified for that period, namely: further development of the oil and gas industry, the development of the oilfield services cluster, the creation of transport and logistics cluster, the creation of a tourism cluster and the development of the construction industry. As ordered by the President of the Republic of Kazakhstan, the issue of the study of solid minerals in the region had already being considered for. It was necessary to start work on geological exploration and in that very direction, because the Mangystau land was famous for a large amount of different minerals. Given the fact that the Special Economic Zone "Seaport Aktau" functioned in the Region of Mangystau, providing preferences and incentives for the development of new enterprises of priority sectors, companies were invited there to create productions oriented to the oil and gas sector in the region.

Mangystau Oil, Gas & Infrastructure 2014 was specifically distinguished with its business program, being full of special events. Thus, a discussion was held within the framework of the round table on "Oil Refining and Petrochemicals, Innovations in the Oil Refining Industry", organized together with JSC "KazMunaiGas – Processing and Marketing", which dealt with all issues concerning the projects of the modernization of refineries. The main speaker was the chief engineer of LLP "JV "Caspi Bitum" of the Aktau bitumen plant Arman Tokhbaev.

The most pressing questions can be summarized as follows: under the State Program of Accelerated Industrial and Innovative Development of the Republic of Kazakhstan, JSC "KazMunaiGas – Processing and Marketing" plans to mechanically complete the project "Construction of the Complex for the Production of Aromatic Hydrocarbons (CPA)" at Atyrau Refinery LLP, which will ensure the production of products with high added value – benzene (133 ths. tons per year) and paraxylene (496 ths. tons per year), as well as motor fuels that meet the environmental requirements K-3.

Implementation of the project "Construction of Deep Oil Refining Complex (DORC)" at the same refinery aims to increase the productivity of the Atyrau refinery up to 5.5 million tons per year and oil refining depth up to 87%, due to processing dark factions – black oil and vacuum gas oil.

Works on modernization of Pavlodar Petrochemical Plant LLP and PetroKazakhstan Oil Products LLP are conducted at the same time. Upon the completion of the modernization the volume of the oil processing will increase from 14.3 million tons per year up to 18.5 million tons per year, and the increase amounts to 29%. Output of black oil will decline by 1162 ths. tons per year, which is almost half the size of the current output. Production of gasoline is expected to increase for more than 2 times, diesel fuel – almost for 1.5 times, production of jet fuel – more than twice of the current production, which is 957 ths. tons per year.

The chief engineer of LLP "JV "Caspi Bitum" Arman Tokhbaev told about the work of Aktau bitumen plant, which reached the design performance – daily load of 3,000 tons. From the beginning of the year the plant has produced 140 ths. tons of road asphalt. Asphalt of Aktau bitumen plant complies in all indicators with the requirements of state standards and the best international patterns.

Currently, Aktau bitumen plant is finishing the preparation to the production of polymer-modified bitumen, being an innovative road construction material, which has not been previously produced in Kazakhstan and not used in road construction. Due to improved performance on heat, frost and abrasion resistance the polymer-modified bitumen prolongs the life of asphalt concrete pavements by 1.5-2 times. To avoid loss of quality during transportation of bitumen, for the first time in Kazakhstan Aktau bitumen plant has introduced the technology for packing road asphalt in disposable shipping containers of two types: "Big Bags" of 1000 kg. and plastic packaging of 40 kg.

Mangystau Region Administration organized also within the framework of Mangystau Oil, Gas & Infrastructure 2014 a roundtable on the development of small and medium-sized businesses in the City of Zhanaozen, where the affiliate programme on the subject was approved and the memorandum on its combined implementation with OzenMunaiGas JSC was signed.

In addition to the extensive business programme, the Oil, Gas and Infrastructure Exhibition in Aktau presented modern achievements in the field of geology and geophysics, oil service, technologies for energy efficiency, environmental projects and programmes. The event is held annually with the official support of the Ministry of Energy of the Republic of Kazakhstan, Mangystau Region Administration and National Company "KazMunaiGas" JSC.

Having finished the exhibition season of 2014, the organizers' team is actively preparing for expo events in the City of Atyrau, uniting two spheres – the oil and gas and construction – Atyrau Oil & Gas 2015 and Atyrau Build 2015. Traditionally, in the same days, the 9th Atyrau Regional Petroleum Technology Conference OILTECH Atyrau 2015 will be held.

The Exhibitions will be held on April 14-16 in the Sports Complex "Atyrau" and will gather around 200 companies from around the world. At the present stage of project preparation, the organizers observe the great interest on the part of companies from Russia. More than 35% of regular participants have already confirmed their participation in Exhibitions.

The main areas of discussion in the Conference OILTECH Atyrau 2015 will be the issues of the efficient organization of exploration work, examples of innovative approaches in the study of layers, as well as the latest developments in the offshore geology. We are expecting an interesting session on drilling, which will disclose the issues of exploratory work and industrial drilling, injection technologies and stimulation. The session on servicing of wells will deal with the following aspects: efficiency of processes of production activities management, optimization of operational processes and production of existing wells. One of the interesting sessions of the second day will be the most relevant topic for the West Kazakhstan area – Development of Oil Refining and Petrochemicals Sectors.

Due to the fact that the development of the oil and gas sector is a strategically important area of economic policy of the authorities in Kazakhstan, the organizers of the largest oil and gas forums in the country – the Exhibition Company Iteca, are confident that the energy potential of Kazakhstan allows declaring with confidence its great prospects, despite the various forecasts about the prospects for oil and gas industry of the world.