On February 28, 2017, Kashagan oil was shipped for the first time to the NEW AMORGOS tanker in the port of Novorossiysk mixed with Siberian Light oil meant for the further export. 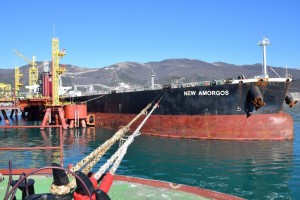 The delivery of such oil started in January of 2017 going for the first time via the new route, in particular via the oil pipeline from Atyrau to Samara owned by “KazTransOil” JSC with preservation of the quality of raw materials, and further transportation via the oil pipeline system of Transneft, in the common flow of low-sulfur light Siberian oil, to Novorossiysk. Until that time, the first batches of Kashagan oil were delivered in the mixture with other varieties of Kazakh oil through Atyrau - Samara pipeline, further being transported through the system of Transneft in the mixture with Russian Urals. At the same time, the netback of supplies in the flow of low-sulfur light Siberian oil is much higher as compared to Urals, which is much more profitable for domestic oil companies and Kazakhstan as a whole. We expect that this route allowing transportation of Kashagan oil with preservation of the quality of raw materials could be used for transportation of light oil from other Kazakh fields in the future.

As it was informed earlier, Kashagan oil had been supposed to be shipped in the port of Novorossiysk on February 22-23. However, it was delayed due to worsened weather conditions.

Reference:
The intake of oil from Kashagan in the system of main oil pipelines of “KazTransOil” JSC started on October 11, 2016. It amounted to 239 thous.tons as of March 1, 2017.