Algerian energy minister Yousef Yousfi has met with Kazakhstan's foreign Affairs Minister Yerlan Iddrissov in Astana to discuss broader cooperation between the two countries in energy and trade as well as coordination between their governments within international organizations. Kazakhstan's Foreign Affairs ministry press service said the country is hoping to solidify its position in the Arab World and the Maghreb in particular. 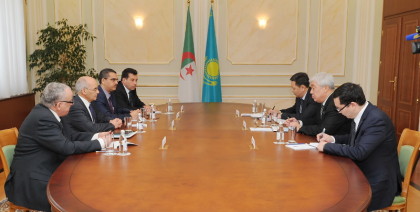 Iddrissov hailed the meeting with the Yousfi as fruitful and also thanked Algiers for supporting their bid to host the international specialized exhibition "EXPO-2017" and said he was counting on Algeria's support and participation to make the event successful. The minister said they are hoping for an all-round cooperation with other African countries after stating that "Kazakhstan considers Algeria as its reliable partner in the African continent and Arab world."

A meeting between the economic actors of the two countries is also being considered to develop the trade and economic relations.

The two sides are looking forward to the sharing of information between their foreign ministries in order to reinforce the coordination of their efforts within the framework of different institutions and to mutually support each other. Algerian Foreign Affairs Minister Ramtane Lamamra has been invited to visit the country.

Yousef Yousfi talked about the situation on world markets, formation of prices for energy sources and prospects of the stabilization of the global oil prices. He will be meeting different ministers and government officials during his visit.

Kazakhstan recently obtained the status of an observer at the African Union and it is trying to strengthen its links with the continent.