In June, 2013 World Petroleum Council is celebrating the 80th Anniversary, as well as the Russian National Committee is celebrating the 55th one. Also, there is one another point to celebrate – One Year Countdown till the beginning of the 21st World Petroleum Congress, the biggest and the most prestigious industry event. The celebration of these three important dates will take place on 25-27 June, in Moscow, while MIOGE 2013/ Russian Oil and Gas Congress in Expocentre. 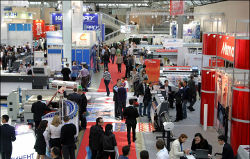 Program of celebration includes a lot of events:

Also, team of 21st WPC is happy to invite you at our stand at MIOGE (pav. 2, hall 1, stand B316). At this 120 m2 booth you can meet our team, ask any questions about the Congress or the process of its preparation, and celebrate the 80th WPC Anniversary and the 55th Anniversary of the Russian National Committee with us.