Kazakhstan holds exercises on liquidation of oil spills in Kashagan 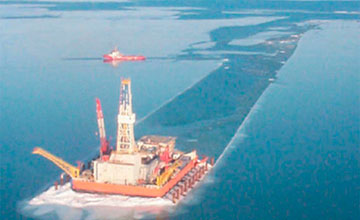 The exercises are being held by the members of North Caspian Consortium operating Kashagan oil and gas field in interaction with the Kazakh regional authorities, the Ministry of Emergency Situations. The participants will exercise the ways of joint activity in case of oil spill.

Kazakh Minister of Emergency Situations Vladimir Bozhko is expected to attend the exercises.

Kashagan is one of the largest fields discovered in the past 40 years. According to the analysts, it has the potential to unite the top five largest oil companies in the world. Kazakh geologists estimate geological oil reserves at 4.8 billion tons. According to the project operator, total oil reserves are 38 billion barrels (six billion tons), with a recoverable volume of about 10 billion barrels. Natural gas reserves are estimated at over one trillion cubic meters. Oil production start at the field is expected until the end of 2013.

At present, the Kashagan project participants are Eni, Royal Dutch Shell, Exxon Mobil, Total and KazMunaiGas, which own equal shares (16.81 per cent), as well as ConocoPhillips - 8.4 per cent and Japan's Inpex - 7.55 per cent.

Last year Kazakh Minister of Environmental Protection Nurlan Kapparov said that the possible oil spills at Kazakh Kashagan oil field might be more catastrophic than in the Gulf of Mexico and the country's environmental services are not ready to prevent such a situation, Kazinform refers to trend.az.

"Oil production at Kashagan will be launched in 2013, and we are not ready to prevent oil spills yet. If a spill occurs, it will be disastrous. It can be even worse than the catastrophe that took place in the Gulf of Mexico," Kapparov said.

Kapparov believes that Kazakhstan should create a strong base for responding to oil spills.