(Reuters) - State-run KazMunaiGas, Kazakhstan's second-largest oil producer, will invest 1.5 trillion tenge ($9.9 billion) in exploration in the next 10 years as it aims to nearly double its reserves of crude oil and gas condensate, the company's head said on Monday 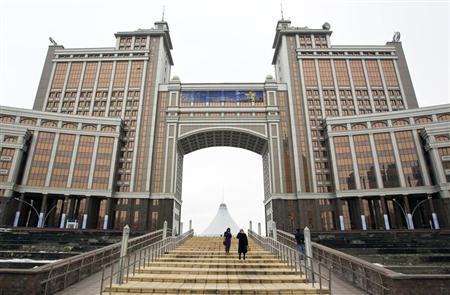 KazMunaiGas Chief Executive Officer Lyazzat Kiinov said the company's current reserves stood at over 800 million tonnes of liquid hydrocarbons.
"We want to nearly double (reserves) in 10 years to over 1.4 billion tonnes," Kiinov told a news conference broadcast live.
"In general, we are thinking of investing 1.5 trillion tenge within 10 years, that is, until 2022."
Larger reserves would boost the market value of KazMunaiGas and increase its output, Kiinov said. The company has said it plans to raise annual oil output by 60 percent to 35.4 million tonnes by 2022.
Kazakhstan, the second-largest post-Soviet oil producer after Russia and home to 3 percent of the world's recoverable oil reserves, plans to boost oil output to 82 million tonnes this year from 79.2 million tonnes in 2012.
KazMunaiGas controls London-listed KazMunaiGas Exploration Production RDGZ.KZ (KMG EP), whose output and financial results are consolidated in the results of the parent company.
KazMunaiGas owns more than 40 oil deposits in the Mangistau and Atyrau regions in western Kazakhstan. It takes part in multinational consortia developing the giant onshore Tengiz oil deposit and the large Karachaganak oil and gas condensate field.
The offshore Kashagan field, the world's largest oil discovery in more than four decades, is expected to produce its first oil later this year. KazMunaiGas holds a 16.81 percent stake in this project.
KMG EP plans to boost oil production by 1.6 percent to 12.4 million tonnes in 2013 to end its two-year output decline caused mainly by a workers' strike at its wells in Mangistau.
Kiinov said the Ozen oil deposit, one of Kazakhstan's oldest and a core asset of KMG EP, ramped up output earlier this month after years of steady decline.
He said KazMunaiGas planned to conduct new exploration of Ozen. "If we find new strata, this would be a great solution of the problem giving the field a new birth, so to say," he said.
KazMunaiGas intended to invest in new deposits, Kiinov said without elaborating. "A company, whatever successful, must have explored reserves enough to run for 20 or 30 years," he said.
AGGRESSIVE BORROWING
Last week KazMunaiGas raised $3 billion via two Eurobond tranches, part of a borrowing program of up to $10.5 billion.
The bulk of the $3 billion will be used to refinance old debts and will be invested in Kashagan, Kiinov said.
Kazakhstan has a pre-emptive right to buy out an 8.4 percent stake in Kashagan owned by U.S. oil major ConocoPhillips (COP.N), which is shedding overseas assets to focus on lower-cost domestic shale oil and gas.
Asked if KazMunaiGas intended to buy the stake for itself, Kiinov said: "We are happy with our 16.8 percent; it's alright. We are not striving to be the main player (in Kashagan)."
ConocoPhillips has said it intends to sell the stake to India's state-run Oil and Natural Gas Corp (ONGC.NS) for about $5 billion.
China also has shown interest in buying the stake, Kazakh Oil & Gas Minister Sauat Mynbayev said last week.
A deal could be struck in the first half of this year.
Stakes in Kashagan identical to KazMunaiGas's 16.81 percent are held by Italy's Eni (ENI.MI), U.S. major ExxonMobil (XOM.N), Royal Dutch Shell (RDSa.L) and France's Total (TOTF.PA). Japan's Inpex owns 7.56 percent.
(Editing by Jane Baird)
Get E-invitation Book a stand