I-P-2 Heads of Agreement signed between KMG and LUKOIL 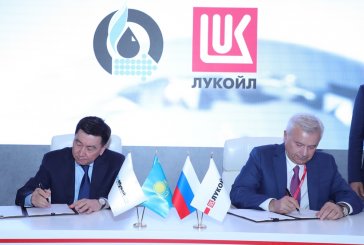 The document has been signed to formalize the negotiated and agreed partnership conditions and commitment to joint implementation of I-P-2 Project placed within the Kazakh borders of the Caspian Sea.

The parties now, as is statutorily required, plan to have the next negotiations round with the Ministry of Energy of the Republic of Kazakhstan to get mineral right for I-P-2 offshore operations. Signing of raw hydrocarbons exploration and production contract and joint venture foundation will be the next step the parties are supposed to take so as to start site operations.

The I-P-2 license block is located within the Kazakh borders of the Caspian Sea. Depth of the block water varies from 300 to 400m; distance to the shore line is 130 km. 2D seismic operations took place over the years.

«We welcome LUKOIL commitment to expand partnership with KazMunayGas and develop Kazakh section of the Caspian Sea. I believe that signing of the I-P-2 Heads of Agreement will further boost our bilateral partnership», – KazMunayGas CEO Alik Aidarbayev said.

Partnership between KazMunayGas and LUKOIL has strategic nature. The companies jointly develop the Karachagank, Tengiz, Kumkol projects and partner in the Caspian Pipeline Consortium – the oil transportation project.

1 April 2019, the Raw Hydrocarbon Exploration and Production Contract, covering Zhenis offshore operations, has been signed between the Ministry of Energy of the Republic of Kazakhstan, KazMunayGas and LUKOIL.