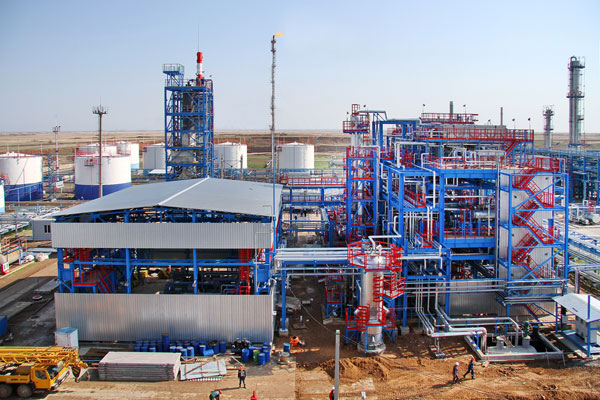 Karachaganak Petroleum Operating BV (KPO) intends to begin supplying gas condensate to the Condensate refinery. According to the Minister of Energy, Kanat Bozumbayev, the company intends to stabilise the gas condensate itself, and the excess will be sent to the Kazakhstan plant.

Meanwhile, as it was reported by Condensate, no memorandums or resolutions on the supply of raw materials to the plant have been signed yet.

In August 2017, the company completed work to increase the processing capacity of raw materials from 600 to 850 thousand tonnes per year. This allowed it to get on the list of large refineries in the country. The main problem here is insufficient raw material loading. For example, in 2017–2018, it was no more than 30%. The situation did not change in 2019.

Today, the refinery accepts only the discharge volumes of Karachaganak unstable gas condensate. It is supplied on the initiative of KPO during short-term repairs, no more than two or three days a month.

The main reason for the impossibility of purchasing Karachaganak raw materials is its high cost. According to the final production sharing agreement, KPO has no obligation to supply raw materials to the domestic market of Kazakhstan.

“The company is ready to sell it only at the world export price. This cost is unprofitable for processing at any refinery in the country at current prices for gasoline and diesel fuel,” Andrey Bayev, deputy general director of Condensate, explained.

The issue of refinery loading can be solved by resuming the supply of unstable gas condensate from the field in the amount of not less than 25 thousand tonnes per month at reasonable prices. The situation can be affected by including the Condensate oil refinery in the schedule of oil transportation by Kazakhstani producers, which is approved by the Ministry of Energy.

“When the refinery is fully loaded with raw materials, all local chains of gas stations, as well as agricultural producers, will be provided with their own high-quality fuel. The local budget will receive excise taxes for 3 billion tenge per year. Now this amount is 500-600 million tenge. Our gasoline and diesel fuel correspond to the highest environmental class, K5. The products have a large export potential, which implies the flow of foreign exchange earnings into the country,” Andrei Baev said.

The consortium of foreign companies can stabilise and prepare up to 12 million tonnes of gas condensate per year for export via the CPC pipeline.

“According to the Thomson Reuters information agency, in February 2019, gasoline reserves at Kazakhstan’s oil depots amounted to 410 thousand tonnes, with the possibility of storing 380 thousand tonnes with a surplus of production, because of the seasonality of the market. However, the situation with the production of diesel fuel remained tense, in connection with which this oil product was imported from Russia in the amount of 61 thousand tonnes,” Andrei Baev said.

The main activity of Condensate is the processing of unstable gas condensate, the production and sale of petroleum products, including high-quality motor fuels. The plant is located on the territory of the Karachaganak field, the oil reserves of which are 1.2 billion tonnes, and 1.35 trillion cubic metres of gas. In 2018, more than 37 thousand tonnes of high-octane gasoline and more than 7 thousand tonnes of diesel fuel were produced at the Condensate plant. More than 137 thousand tonnes of oil was processed in total.

By Alla Zlobina for Kursiv (Kazakhstan).