A meeting between the president of SOCAR, Rovneg Abdullayev, and the Kazakh delegation led by Alik Aydarbayev, chairman of the board of the KazMunayGaz oil company, was held in Baku. 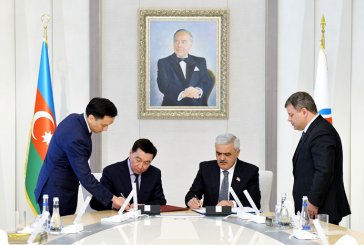 The Kazakhstan delegation was also represented by the Deputy Chairman of the Board for KazMunaiGaz Exploration, Production and Oilfield Services Kurmangazy Iskaziyev, the General Director of Kaztransoil Dimash Dosanov, General Director of the National Maritime Shipping Company Kazmortransflot Marat Ormanov.

At the meeting, prospects for cooperation in all segments of the oil and gas industry, and a plan for joint activities for the near future were discussed. Then the heads of SOCAR and KazMunayGas signed a Memorandum of Understanding.

The memorandum provides for broad prospects for cooperation between the companies, including in the field of geological exploration in the Caspian Sea, a joint study of geological and geophysical materials for the exploration of hydrocarbons, as well as in the field of logistics, trading of oil and oil products. As the first concrete project of cooperation, the Memorandum provides for the transportation to Baku and modernisation of the Setti floating drilling rig owned by KazMunaiGas for subsequent use when carrying out drilling operations on SOCAR projects in the Azerbaijani sector of the Caspian Sea.

During the meeting, a letter of intent between the Marketing and Economic Operations Department of SOCAR and the Kazmortransflot National Company about the prospects for cooperation in the field of hydrocarbon transportation was signed.

After the official meeting, the delegation familiarised themselves with an interactive exhibition dedicated to the history of the oil industry in Azerbaijan and the successful implementation of the new oil strategy of the republic.

KazMunayGaz National Company is the national operator for the exploration, production, processing and transportation of hydrocarbons in Kazakhstan. The KazMunayGas National Company, founded in 2002, includes more than 190 organisations. The shareholders of KazMunayGas are Samruk-Kazyna National Welfare Fund at 90% and the National Bank of Kazakhstan at 10%.